Properly reading your OCW targets is key to choosing the right load.  If you're not quite sure how to interpret your target results, you might want to re-shoot the test.  Alternately, I will do OCW load consulting, where we go over your targets by phone conversation together.  Click on "Consulting" above for details.

As you go through your individual target groups, the key things to look for are the "opening and closing" points along the continuum.  If the test is properly executed, and the firearm is in good condition for accuracy, the results will speak boldly. Look for transitional groups along the way, where two shots will be in one place, and the third shot well outside that group.  Look at whether that third shot may be "pointing to" another point of impact location, one graduation above that charge level.  This will help you see where the point of impact (POI) is moving.  Often, very shortly after a POI movement you will find that you're moving into the accuracy node area, or the OCW zone as I call it.

As has been mentioned elsewhere, don't get persuaded by a small group which is not on a stable POI area.  That accuracy level will almost certainly not repeat.  Remember, you're looking for at least two powder charge levels that share a common POI.  If graduations are just under 1 percent in size, you will likely find three groups sharing that POI, with the center group being the tightest.

There are some great guys out there who have been using the Ladder Test for eons to get to a good load recipe. While many have had good results with the loads they've developed in this manner, others have reported difficulty interpreting the results on the target. Still others have claimed that they have properly identified a wide accuracy node with the Ladder Test--but will also tell you that the seating depth is critical, or that primer selection is critical--otherwise the load "goes all over the target." If this is the case, the likelihood that the individual is truly using the best powder charge is slim. Don't get me wrong--you can use an inopportune powder charge and get away with it. You might even win a match or two with it. But if you're having to keep to critical tolerances just to keep the load from exceeding MOA, you're "walking the tightrope to accuracy." Which, by the way, I discuss HERE...

One of the reasons I designed the OCW load development method is that I was one of those guys who found that results from a 200 or 300 yard ladder test were often inconclusive. I knew that the method had (and still has) merit. But I also knew that there had to be a better way.

With the Ladder Test, it is generally recommended that you fire 20 shots in graduated powder charges of around .2 grains (.3 grains on larger cases). You are to begin at the published starting load, and proceed upward. You fire at the same bullseye, and watch for a succession of shots to cluster at some point (or points) along the continuum.

An aside: In my opinion you will be wasting bullets, powder, and barrel life on the first 8 to 12 of those shots. While it is of course important to work up from lower powder charges (beginning published loads), you should not be too curious as to whether you find an accuracy node in the area just above the starting charge level. Do you want your 30-06 to act like a 30-30? Or your 220 Swift to act like a .223? We choose a rifle chambering based on an expected performance level from that cartridge. Since it is doubtful that you will be willing to settle for a reduced velocity load, you should move quickly through the first half of the charge weight range by stepping up in larger increments to begin with.

The main thrust of this piece is to (hopefully) bring the reader to an understanding of what can go wrong in a ladder test--even a perfectly executed ladder test--which may lead them to incorrect conclusions as to the best powder charge to use.

Check out these OCW targets:

Target above was shot with a 308 Winchester, Remington 700 tactical rifle.  Scatter node is at 43.8 grains.  We found a higher node at around 44.5 grains, and the lower node was around 43.2 grains. Note also the transitional group at 44.0 grains.  The 44.0 grain group is still very close to the scatter node, causing a shot to print farther left than the other two.  Again, the accuracy nodes are around 1.5% away from the scatter nodes--and this has held true even for the mighty 50 BMG!

Don't underestimate the importance of the "scatter group." This will be one group of the round-robin sequence that seems to inexplicably open up. The reason for this? The Shock Wave, as identified and described by engineer Chris Long is at the muzzle when those bullets are being released. Generally, a 1.5 percent powder charge increase above or below the scatter group charge weight will have you right in the OCW zone.

Most importantly--please note that in each of the scatter groups shown above, ONE shot lands right on the same POI (or within 3/8 MOA or so) as the groups preceding and proceeding it. This means that in one of three instances, during a conventional Ladder Test, the target would indicate a wide "sweet spot" where it should not. The OCW round-robin testing easily identifies the problem with this charge weight level, but in (at least) one of three instances, the Ladder Test will miss it--which may lead a shooter to an incorrect conclusion as to the center of the true accuracy node.

Sure you can go back and prove and re-prove your Ladder Test results--but if you'll take the time to understand the OCW/round-robin firing sequence, you'll not have to do any such re-proving; you can move right on to what I call depth tuning (adjusting the seating depth of the bullet for absolute accuracy). 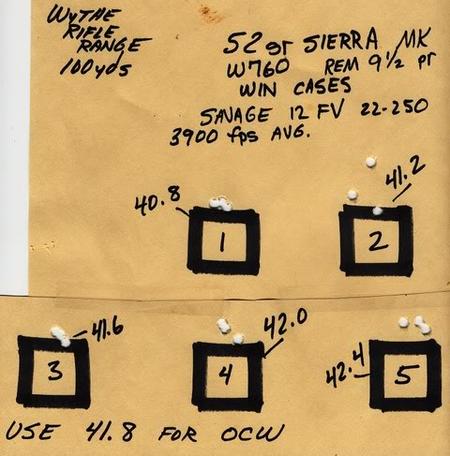 The above two targets are the cold, clean bore shot and follow up after "depth tuning": the cartridge.  Once the OCW is found, you can tighten groups even more, and ensure that the cold, clean bore shot stays with the group by making .005" to .010" seating depth adjustments until you find the best seating depth for the particular lot of bullets (and powder) you are working with. 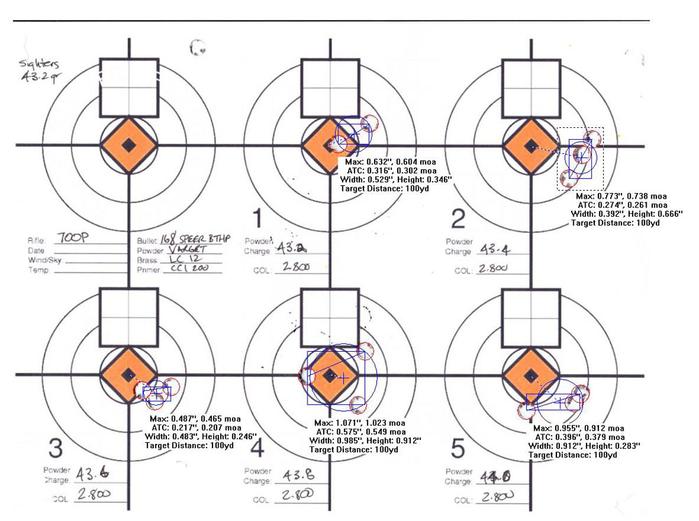 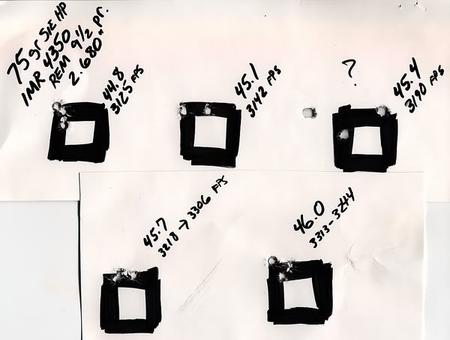 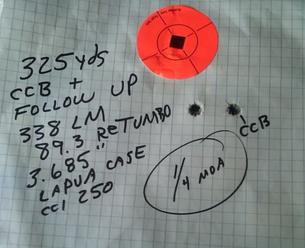 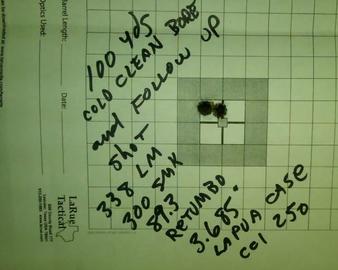 The fastest and most effective way to develop accurate handloading recipes for your rifles and handguns.